Be Humble: Modric Slams English Press for Underestimating Croatia as England Crash Out of World Cup

Be Humble: Modric Slams English Press for Underestimating Croatia as England Crash Out of World Cup

Croatia midfielder Luka Modric has revealed his side were motivated by the English press’ lack of respect towards them ahead of Wednesday night’s World Cup semi-final.

Modric – who was absolutely imperious in Moscow – helped his side to a 2-1 extra time win over the Three Lions, who will head home with their heads held high after forcing an unexpected ​path to the last four of the tournament for the first time since 1990.

Kieran Trippier’s wonderful free kick put England ahead on the night within five minutes, but Ivan Perisic’s second half equaliser sent the game into an additional period. From there, it was Mario Mandzukic who ended the England fans’ hopes of a final against France on Sunday. Instead, England will meet Belgium in Saturday’s third place playoff.

Modric took the time to speak to ITV after the game, and made a point that he and his team were fuelled by a typically arrogant English press, who had already been planning for the final and writing off Croatia for potentially not having the energy to win. Croatia had been through extra time and penalties in their previous two games, but looked stronger than England on Wednesday night in spite of that. 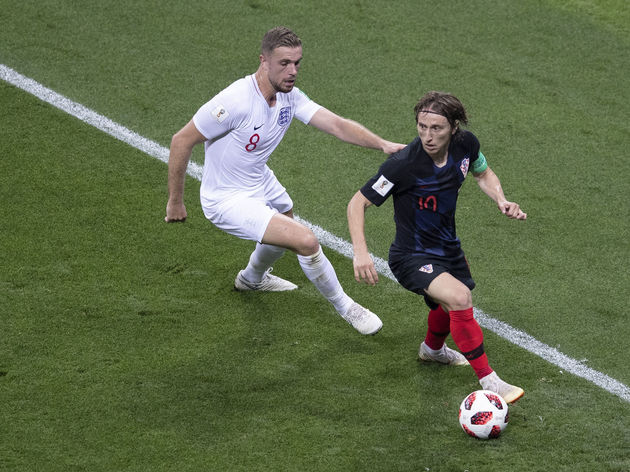 The ​Real Madrid man said: “People were talking…English journalists, pundits from television, they underestimated Croatia tonight and that was a huge mistake.

“All these words from them we take, we were reading and we were saying: ‘OK, today we will see who will be tired.’ They should be more humble and respect their opponents more.

“We showed again that we were not tired – we dominated the game mentally and physically.

“English journalists, pundits from television, they underestimated Croatia tonight and that was a huge mistake. All these words from them we take, we were reading and we were saying ‘ok, today we will see who will be tired'” pic.twitter.com/Rxyv4WA03c

“We should have killed the game even before extra time. This is an amazing achievement for us – it’s a dream come true after such a long time. We are in the final and that is the biggest success in Croatia history. We have to be proud.”

Modric’s sentiments were echoed by Ireland assistant manager Roy Keane on ITV’s coverage itself, as he accused England’s pundits of talking about the final way ahead of time.

“I made the point a few days ago, you have to focus on one game at a time, I heard people all talk about finals, football’s coming home – you all were planning the parades.

One thing is for sure, though – England players and manager have done their nation proud over the last month, and while football didn’t come home, there’s many a reason to believe it still could in the years to come.