The State of Brighton: An Overview of the Club’s Prospects as Football Takes a Break

The State of Brighton: An Overview of the Club’s Prospects as Football Takes a Break

​Before a ball had even been kicked this season, Brighton knew they were in for a tough ride.

Following the departure of the steady hands of Chris Hughton at the end of the last campaign, the Seagulls were dreaming bigger, employing Graham Potter as head coach to help revolutionise the club’s style on the pitch.

While the season began relatively brightly for Potter’s new-look Brighton, the wheels have somewhat come off since mid-December. Draws have become the order of the day for the south coast side, and they sit perilously close to the bottom three as football takes a break.

Now seems the perfect time for the club to dig a little deeper and evaluate how Potter’s debut season has gone at the Amex Stadium. With just two points separating themselves in 15th and ​Bournemouth in the relegation zone, Brighton would be justified in feeling a tad worried at this point. Nine games stand between themselves and another year in England’s top flight, but form dictates that it’s going to be a nervy finish for the Seagulls.

​Brighton haven’t won a single Premier League match in 2020, having drawn six and lost three of their last nine games. With Arsenal, Manchester United, Leicester, Liverpool and Manchester City still to play, Potter may just have one eye on ​Championship preparations next season.

Cup competitions have offered little salvation for the struggling Seagulls, who have been knocked out by Aston Villa and Sheffield Wednesday in the third round of the Carabao Cup and FA Cup respectively. With the club making the trip to Wembley for the semi-final of the latter last season, fans along the south coast will be a little disappointed in their form away from the league. ​The young duo of Aaron Connolly and Steven Alzate will return when football does, having missed Brighton’s last match through injury. However, Colombian winger Jose Izquierdo – who hasn’t played a single game for the Seagulls this term – will likely remain in the treatment room following a lengthy knee injury. ​With nine games remaining of the season, Brighton will be hopeful that they have enough in the tank to beat the drop. However, Potter’s men have a fair few difficult fixtures during their run-in and may find wins hard to come by.

Undoubtedly a few scalps against the Premier League’s big boys wouldn’t go a miss, but realistically Brighton’s season may hinge on their final three ‘winnable’ fixtures. But the Seagulls have struggled for goals this season – scoring just 32 – and will find penetrating some of the defences they are still to come up against difficult.

Thankfully, you can often rely on someone else being even worse than you at the foot of the ​Premier League table. ​The good news for Potter is that only two of his players are out of contract this summer, with both the infrequently used Beram Kayal and defender Ezequiel Schelotto set to leave the club in summer – pending any contact renewals. 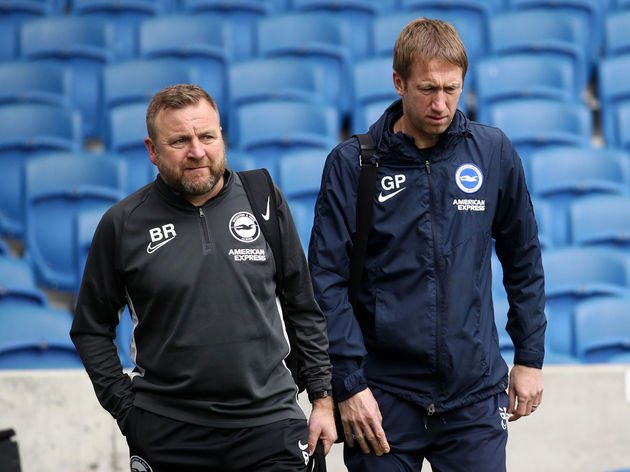 ​Obviously, Brighton’s summer transfer plans will be completely and utterly dependent on whether they are still a Premier League side next season.

Assuming they are, then the Seagulls could do with a fair bit of reinforcement, particularly at full-back, on the wings and up front.

They’ve been linked with CSKA Moscow forward Fyodor Chalov to help ease the burden on Neal Maupay, while the return of impressive youngster Ben White from his loan at Leeds – should he decide to stay with the club in spite of consistent transfer speculation – may help tighten up their back line. ​While the short-term ambition for Brighton is simply to stay in the Premier League, the club has to look ahead and hope for a brighter future under Potter.

Realistically, the Seagulls will be hoping they can push towards the middle of the league table next season, and continue to evolve their passing-orientated style of football.

Some signings would sure help, but there are plenty of exciting youngsters at the Amex who should help solidify Brighton as a consistent Premier League side under Potter.